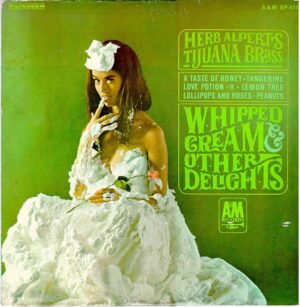 Ok — raise your hand if you didn’t own this record.

What record collection would be complete without this Herb Alpert masterpiece? Certainly not mine! It has been said that the thrift stores of any large city contain enough copies of “Whipped Cream and Other Delights” to wallpaper a house (I once found 10 copies in one small store in Cleveland, of which this one was in the best condition).

When I was growing up, “Whipped Cream” was one of only three records my parents had in their collection (the others were a Barbara Streisand album and a Johnny Mathis christmas record). My dad often dropped the needle on “Whipped Cream” over and over again during family gatherings — and when no one was around, I’d spend hours admiring the cover art, attempting to discern exactly where the whipped cream ended and the young model began. You can do the same by checking out the image. (Those of you that aren’t inclined toward the female form can look for the way they used a drop-cloth to fake most of the cream, or if you’re really bored, try to find the seam where I pasted the two halves of the scanned image together).

A record like this could easily have sold a billion copies on the strength of the photography alone, but “Whipped Cream and Other Delights” actually has some pretty snappy music on it. Pick up a copy today — I can state with confidence that this album is available for $1.00 or less at a junk store or garage sale near you!