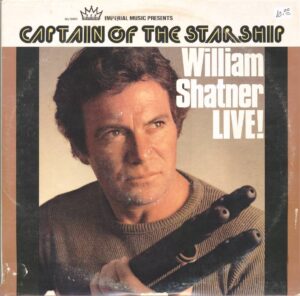 When William Shatner’s career was on the skids.

By now everyone’s heard about William Shatner’s The Transformed Man — that infamous 60’s recording where he sings Mr. Tambourine Man and Lucy in the Sky with Diamonds — but check out this other Shatner LP, an ultra-rare two-record set recorded live in 1978. It’s a recording of an appearance at some kind of a Star Trek convention just before the first Star Trek movie came out (probably the lowest point in Shatner’s career). Half of it consists of Shatner answering questions from the audience (where was the bathroom on the Enterprise?) and recalling inane stories from his career. On the other half, he performs dramatic poetry interpretations, including “Earthbound”, “The Flight of Man” and a reading from H.G. Wells’ “War of the Worlds”.

On the artwork for Transformed Man, Shatner appeared as Captain Kirk, in his full starfleet uniform. Here, however, licensing restrictions prevented Imperial House records from using any actual Trek material. Notice how Shatner is the captain of the “Starship”, not the “Enterprise”, and how his shirt, while similar to the one he wore on TV, lacks the official Star Trek insignia. If you look closely you might also notice that the space rifle he’s wielding is actually an upside-down camera tripod — talk about your low-budget photo shoots!