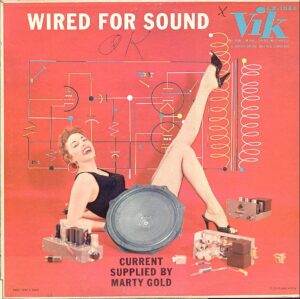 Early electronica with an amazing babe on the cover!

I don’t usually buy albums solely for the cover art, but in this case I couldn’t resist. Produced in 1956, Wired For Sound is an early manifestation of the electronic music craze that would come to fruition some two decades later with the advent of the Moog synthesizer. Unless you count the “artificial echo produced electronically completely under the control of the recording engineer”, there really isn’t much that’s unconventional about this record. It does, however, have lots of gimmicks and sound effects of the kind that were typically used to dazzle people not used to hearing high-fidelity stereo. The music turned out to be a bit better than I was expecting, too. And the cover art — well, it speaks for itself!